There are many dances involved with a wedding reception. When planning this party, it’s important to consider all your options. They don’t all have to be incorporated in this time, but they are all great ways to share a moment with your loved ones. 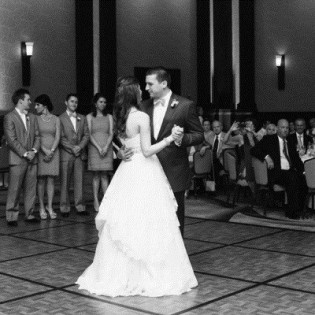 It’s traditionally expected to see the bride and groom share their first dance together as a married couple during the reception; when specifically they take the spotlight isn’t. Some choose to move directly to their first dance after being announced and others wait until after a cocktail hour. Timing aside, it’s important for the bride and groom to decide on a song that they would want to call “their song.”

This is a sweet moment for the father of the bride and his daughter. After giving away his little girl at the altar, this man deserves a chance to share a moment with her. This dance can mean many things to many people because of how we all have very diverse families, so choosing a song may be difficult. It is a bittersweet moment and one that won’t be forgotten. 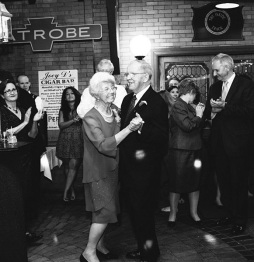 This is a fun one for all married couples at the reception. The song isn’t really as important to this dance, but what happens during the song is what makes it special. It starts when DJ invites all the married couples to the dance floor. Then as the song goes along, he or she calls out numbers of years and couples leave when a year longer than their marriage is announced. At the end of the song only those who have been together the longest will still be dancing. It’s a sweet way to recognize relationships that have lasted the test of time. 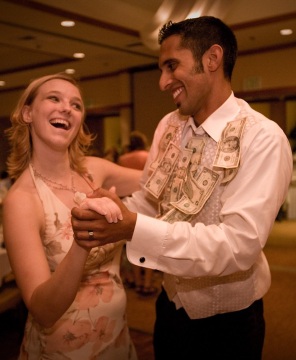 This dance is a fun way to spend time with your guests and make some money doing it. It is very popular and has a long history dating back to European immigrants coming into America. History aside, this is how it works! First, the bride and groom enter the dance floor. Second, guests line up (males by the bride and females by the groom) to dance with the couple. However, this opportunity comes at a price, at least one dollar. The bride and groom can either collect the money in a purse or bag, or they can have the maid of honor and best man collect it for them. Each guest gets roughly 15-20 seconds with the bride or groom, normally a slow song is chosen for this. This dance can be a time consumer if you let it, so use it carefully!

There are many things to prepare for a wedding and many people involved to help. This post will serve as a guide of who has what tasks.

The bride and groom work together for the majority of the wedding and planning. For them to have a day that is truly about the both of them they must work together to get what they both want. That includes everything from choosing the date and sending out thank you cards. However, there is so much in between. They must decide upon a venue, invitations, officiant, theme/color scheme, flowers, photographer, wedding cake, and picking out rings (the groom buys the bride’s ring and the bride buys the groom’s ring). Also, they must set a budget (unless that is set for them by whoever is helping pay for the wedding).

Although the bride shares many tasks which her groom, she still has choices to make on her own. First, she picks her maid of honor and bridesmaids. To thank them she organizes a bridesmaids’ luncheon where she will present them with gifts to show her appreciation of their hard work. Second, the bride buys her groom a gift. She might also prepare vows to share her love with him, if they choose to do so.

The groom also has his fair share of additional tasks for the big day, more than the bride even. First, he must choose his best man and groomsmen; the groom also picks their clothing. He will buy them thank you gifts to reward them for their hard work just like the bride does for her ladies. Second, the groom buys his bride a wedding gift. He would write vows for her also, again only if they decided to share vows on their wedding day. Third, he pays for their marriage license along with the fee for the officiant. Lastly, the groom reserves rooms at a nearby hotel for guests who will be traveling for the wedding.

Over time the tradition that the bride’s parents pay for all wedding expenses has somewhat went away. They still help, but the groom’s parents and the bride and groom open their wallets too. However, the bride’s parents have roles that aren’t as well known. Together they help with the guest list as needed and host the couples’ first engagement party. Along with lending a hand whenever their daughter needs advice. They do separate on a few details:

It is extremely important to choose the right maid of honor because she (or he) is involved in almost every aspect of the wedding. Someone like Jane from 27 Dresses would be a better choice than Tom in Made of Honor.

The flower girl simply has to look cute and walk down the aisle. She can drop flower petals as she walks or just carry a small bouquet of her own. The flower girl is normally no older than 8, but just be careful not to go so young that she isn’t comfortable with her job.

The best man is the groom’s equivalent of the maid of honor; he is just as important as she is too. He is the other signature on the bride and groom’s wedding license. He has to throw the groom a bachelor party, make sure all the men in the wedding have the right clothes, confirms honeymoon reservations the day before, returns all rented items after the wedding, and much more. He toasts the couple at their rehearsal dinner and reception following the wedding ceremony. The best man is responsible for bringing the groom’s clothes to him and getting him to the wedding on time. The best man keeps track of the bride’s wedding ring and the money to be given to the officiant. After the reception is coming to a close, the best man is responsible for getting the bride and groom’s bags into their car and well as decorating it.

The groomsmen are in the same boat as the bridesmaids. They have no additional responsibilities, but are there for support. If the groom and best man need something done, they may be asked to take on a task or two. For the most part, groomsmen help with the bachelor party and show up early to the wedding to help wherever they are needed.

Many different options are involved when choosing the perfect wedding dress. You must choose a veil, neckline, waistline, skirt, and train. Within each of those areas there are many styles to consider. This post guides you through each of the components of a wedding dress in order to help you choose the best fit for you.

First, veils are the most iconic feature that a bride can incorporate into her wedding attire. The many lengths of veils correspond to the type of ceremony that is chosen. However, there are many things to consider when picking out a veil.

When choosing your veil it is extremely important to consider your venue, party attire, and your personality. If you are looking for a causal event then maybe you want to look into the elbow or fingertip lengths. On the other hand, if you want an elegant wedding with drama the chapel and cathedral lengths might be more your style.

Second, there are seven necklines to choose from including: Square, Sweetheart, Boat, Scoop, Jewel, V-neck, and Surplice. It is extremely important to consider your upper body. In order to look like the perfect bride, the neckline must not be too bulky or too revealing. More busty brides should lean toward Scoop, Boat, and Jewel necklines. Small chested ladies would look better in Sweetheart, Square, and Surplice necklines.

Third, a waistline that will prove to be flattering is essential. All women want to look skinny and this is where that can be made possible. Avoiding a dress that will drown or suffocate the bride is an absolute must. Slimmer women might look more toward the Basque or Drop waists. Meanwhile heavier set women might lean toward the Empire Waist or Princess Seam.

Fourth, skirts add personality to any dress. For a more simple and conservative look the Fanback or Streamers styles would be the way to go. Bubbles, Overskirts, and Bustles create a princess feel while Tiered and Flounce seem punk. There are many statements that can be made by the skirt of a dress; make sure your decision reflects how your guests should see you. 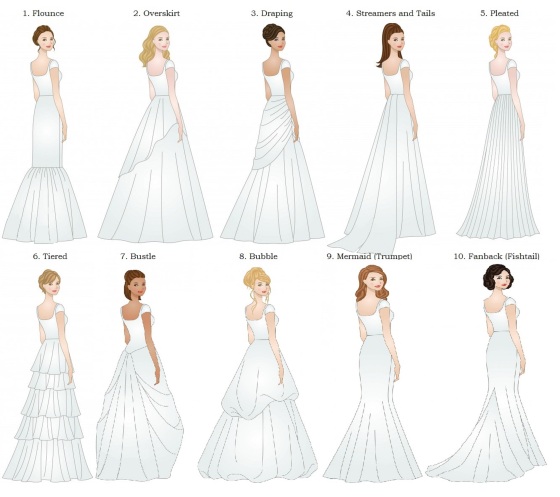 Fifth, one of the most iconic aspects of a wedding dress is the train. The different styles of trains can match the level of formality of your wedding. Of the trains shown below, they become more formal as you move to the right. For example, a simple outdoor wedding would most likely feature a bride with a Sweep train. However, a bride with a Watteau train belongs to an upscale wedding in a vineyard. 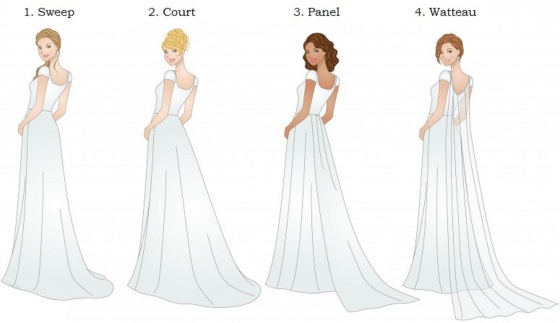 No matter what type of wedding you are planning, choosing the right dress is a must. Be careful when inviting friends and family to accompany you. They have to be supportive of you and focus on what is best for you, not them. Say Yes to The Dress is a fun tv show to watch when thinking about your dress. They have a wide range of styles and could be helpful in your search.

Every groom deserves to look back and see their bride as more beautiful than they ever have before. Let love be your inspiration for your wedding day decisions. I hope this has been helpful and good luck! Feel free to comment below!